Tuna. What do you know about this diverse species and the many nutritional benefits it can offer? Tuna is often thought of as only one or two types of fish by many. We think of the canned, store-bought variety as one archetype and the alternative that is sold in classy restaurants as the other. But tuna is much more diverse a species than that. Today, we are going to discuss five  major varieties of tuna and the best way for you to utilize tuna to get more vitamins and minerals in your diet. Giddy up!

The Take on Different Tunas

Albacore, Skipjack. Yellowfin, Bigeye, and Bluefin Tuna comprise the five main commercial tuna species of tuna. Albacore is sold canned as ‘white’ tuna. Most albacore is caught in the pacific. It is known for its mild flavour, which makes it easy to mix in a large variety of dishes. Skipjack tuna is also canned. It is labeled as ‘light’ tuna. Like its albacore cousin, it is caught in the Pacific Ocean. Though it is not as large as the albacore, skipjack can grow up to 70 pounds.

Yellowfin Tuna can be canned or sold as steaks or loins. The yellowfin tuna can each an impressive 400 pounds despite having a lifespan of only 6-7 years. Bigeye tuna, look similar to yellowfin but with larger eyes. The Pacific Bigeye grow up to 6.5 feet long and can weigh up to 250 pounds. The bigeye is often served in sashimi or sushi dishes, as well as in steak or loin form. Lastly, Bluefin tuna is served almost exclusively in sashimi and sushi dishes. Bluefin is the king of the five commercial tunas, weighing up to a gargantuan 850 pounds! Not only that, but at auction, a single bluefin tuna can fetch up to 3 million dollars! 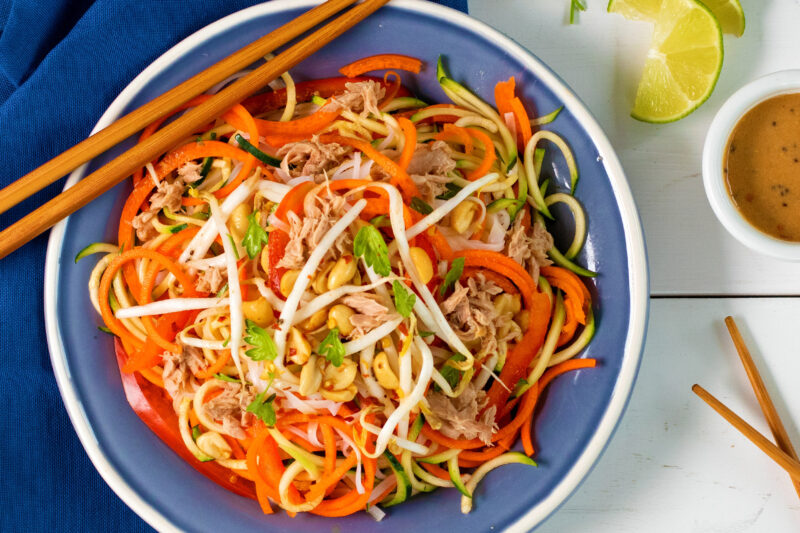 So, we now have an understanding of the many varieties of tuna. But what of tuna nutrition? Canned tuna, such as Ocean’s White Albacore offers many benefits! Canned tuna is power packed with the good stuff in one tiny container. It has many essential nutrients, such as omega-3s, lean protein, selenium and Vitamin D. It is also exceptionally low in fat, at less than 2 grams of fat in a 100 gram serving. 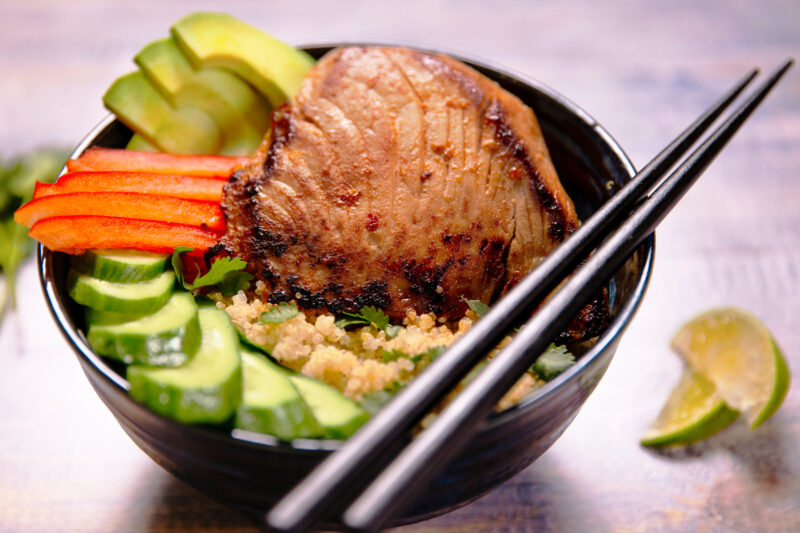 In addition to having so many varieties and being nutritious, canned tuna is an adaptable component that can be added to practically any dish you can think of. Yellowfin makes great steaks, as evidenced by Ocean’s new line of Yellowfin Tuna Steaks. In addition to that, flaked and white tuna are great compliments in salads and sandwiches. If that isn’t your style Ocean’s tuna also adeptly serves as the key ingredient in dishes like pastas, casseroles, tacos, and even stir-fry!

With so many dining options, you have no excuses to not try tuna in your next meal. If you want more tasty options, check out the rest of our recipes at oceans.ca! ‘Till next time!

Sign up to our newsletter to receive information and updates from Ocean’s!